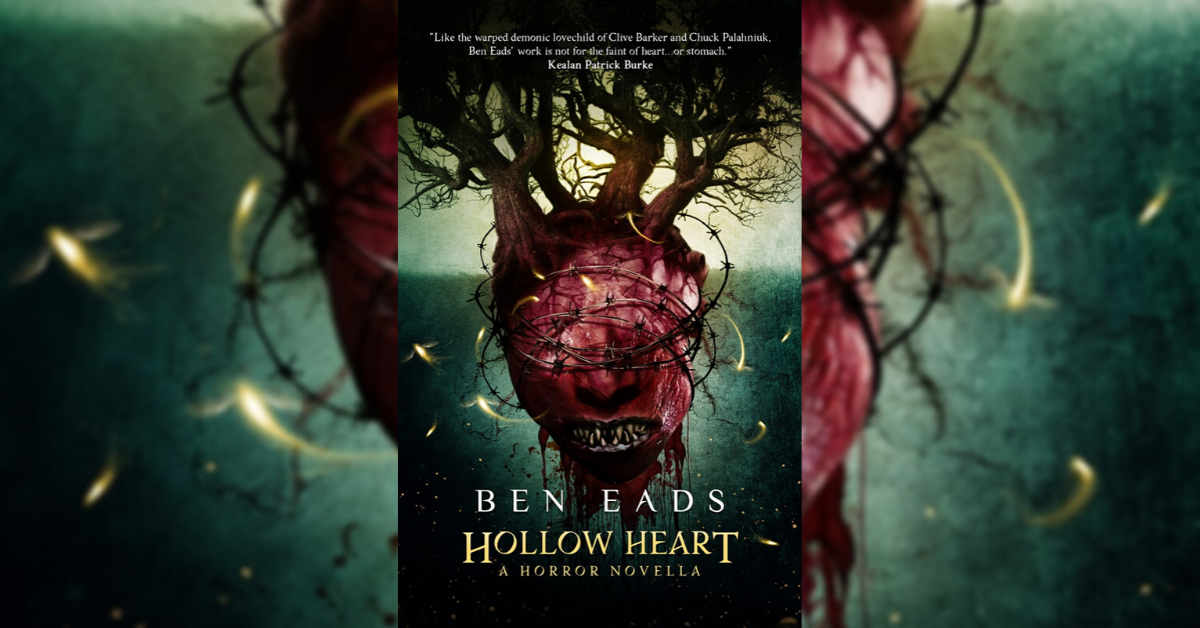 Welcome to Shady Hills, Florida, where death is the beginning and pain is the only true Art…

Harold Stoe was a proud Marine until an insurgent’s bullet relegated him to a wheelchair. Now the only things he’s proud of are quitting alcohol and raising his sixteen-year-old son, Dale.

But there is an infernal rhythm, beating like a diseased heart from the hollow behind his home. An aberration known as The Architect has finished his masterpiece: A god which slumbers beneath the hollow, hell-bent on changing the world into its own image.

As the body count rises and the neighborhood residents change into mindless, shambling horrors, Harold and his former lover, Mary, begin their harrowing journey into the world within the hollow. If they fail, the hollow will expand to infinity. Every living being will be stripped of flesh and muscle, their nerves wrapped tightly around ribcages, so The Architect can play his sick music through them loud enough to swallow what gives them life: The last vestiges of a dying star.

“Like the warped demonic lovechild of Clive Barker and Chuck Palahniuk, Ben Eads’ work is not for the faint of heart…or stomach.“

“Ben Eads is a fearless writer, so be prepared. His horror is not for the faint of heart, rather his readers must be equally fearless to face the truth that hides in the dark heart of his work.”

“With his latest offering, HOLLOW HEART, Ben Eads has not only penned an absorbing and deeply unsettling novella that adds to his already impressive and growing body of work, but one that further cements his position as a skilled author on the rise, and deservedly so.”

“In 2015, I reviewed Ben Eads’ very fine novella, Cracked Sky. Among other things, I said the writing was first rate, and to underline twice Ben Eads’ name, put it on the fridge to remind you to look for his byline. I repeat, Hollow Heart is also a very good read, the writing is again 1st rate, the story compelling, only this time underline his name three times on the fridge to remind you to search out and read everything he writes. Highly recommended.“

Gene O’Neill, The White Plague Chronicles and A Stick of Doublemint

Dalton pointed to the hollow. “See the opening?”
Terrell squinted. “Yeah.”
“Walk up to it, and when you see the fireflies, wait for The Architect.”
Terrell’s eyebrows rose. He scratched his head. “The Architect? Why would someone call themselves—?”
“My good man, I can create anything,” The Architect said through the thickest and oldest British accent Dalton had ever heard. “My masterpiece is almost done, my lads.”
While clouds hid the moon, Dalton could barely make out The Architect waiting in darkness, so his memory filled in the rest. He looked as if he’d just finished a hard day on Wall Street, circa 1920, with mutton chops and a bowler hat to top it off. His body shook, as though he were warped celluloid played on a dusty, old projector.
Like each meeting, Dalton’s left eye twitched, the migraine soon to come.
I can do this.
The Architect approached them, splitting the grass below his feet. Reality bowed, faintly shimmering around him. Something deep in the hollow had pressed Play, and all Dalton could see were those double pupils, rolling in their oily sockets. Tiny black rivers ran from the corners, tracing geometry across a face as pocked and scarred as the moon which kissed it.
Bringing his hands together in a steeple, The Architect stopped in front of Terrell. A switchblade smile cut his face, reminding Dalton of an artist’s flip-book in motion. “What do we have here, my lad?”
Dalton cleared his throat, pushing the acid back down. “I—I need more time to find Harold’s dad. While I’m searching,” Dalton motioned to Terrell, “you’ve got him instead.”
Terrell’s jaw dropped. “The hell you doing, Dalton?”
“You disappoint me, Dalton Gladen, but let’s see what you brought,” The Architect said, approaching Terrell. “Come to me, my lad. Let’s have a look at you.” Three hundred pounds of Terrell rose from the ground, until he was nose to nose with The Architect. He grabbed him by the throat, lifting him higher into the air.
Kill him.
The forest’s wildlife and insects fell silent. Dalton could only hear The Architect and Terrell.
Terrell’s hands went to his neck as he choked. “It—it hurts. Stop. Please.”
“It hurts?” The Architect cocked his head. “Pain is just one of my hobbies. A hobby the world will soon know.”
The Architect placed his right thumb on Terrell’s forehead, just above where his eyebrows met. “Your spine was crushed in two places. Your hips, shattered. A few years ago, yes?”
Terrell managed a nod. Dalton tried to move, to breathe. Nothing.
The Architect licked his cracked lips. “Your nerves smell sweet, indeed.” Small pieces of rusted barbwire grew over his teeth, splitting his cheeks. A few barbs stuck out from below his eyes, teasing the air as they grew toward Terrell’s face.
“Dalton. Help,” Terrell managed.
The Architect’s fingers caressed Terrell’s face, wiping away tears. “I know where every nerve in your body starts and ends. Those pathways,” His barbwire maw spun in a circle, like heavy machinery, “they know so, so much.”
God, I hate that sound.
Sparks flew as the barbwire smashed together, forming a sawblade that whirred to life, sending sleeping birds from their nests. Metal cutting metal echoed off the massive oaks and birches. The Architect’s face split as the blade came out. Dalton strained to hear The Architect’s words over the din.
“Whether they’re in your spine, your teeth, your intestines—I will find each and every one of them. Once I string them around your spine, you will be my new cello.” The Architect leaned in close to Terrell’s ear, mouth whirring faster. Black oil splashed Terrell’s face. “My lad, you will sing.”

Νέα κυκλοφορία: The Streaming of Hill House: Essays on the Haunting Netflix Adaption